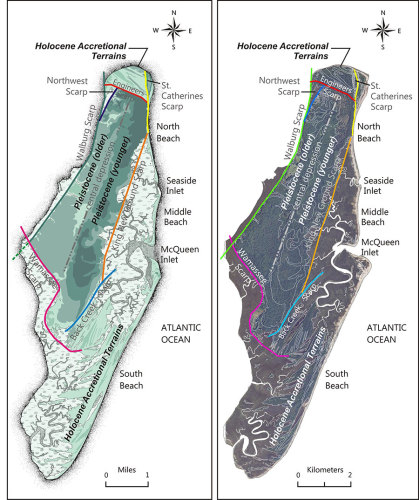 The island core is a relatively high topographic feature with little relief that occupies the western portion of the island complex and was previously assigned to the Silver Bluff Shoreline Complex (Hails and Hoyt, 1969). The Holocene accretional terrains are situated on the northern and southeastern portions of the island and consist of progradational beach ridge and swale sediments.

The island core is mostly composed of Late Pleistocene barrier island deposits initially assigned to the Silver Bluff Shoreline Complex (Hails and Hoyt, 1969). The island core reaches elevations of 5 to 7 meters above mean sea level with moderate to little relief and is slightly higher in elevation on the eastern portions of the core.

The three ridge and swale sediment packages that occur in the northern accretional terrains of St. Catherines Island are bounded or separated by three erosional boundaries or scarps designated as Northwest Scarp, Engineers Scarp, and St. Catherines Scarp.

A conceptual model for the development of the island was initially formulated by Bishop and refined by Meyer, Vance and Bishop from 2009 to 2013 (Bishop et al., 2011; Meyer, 2013). The model is based on 12 sequential steps that are framed on the relative sequences of scarps, absolute dates of sediments, regional information regarding sea level, and several assumptions.

Based on the occurrence of eastern marshes and associated relict marsh muds on St. Catherines Island, an assumption was made during the development of the model that a barrier island formerly existed in the Late Holocene to the east of the current location of St. Catherines Island. Island couplets are observed on the Georgia coast such as the St. Simons–Sea Island or Sapelo–Blackbeard Island couplets, and it was assumed that a similar couplet with intervening salt marsh existed at St. Catherines Island prior to removal under the modern transgression. The hypothesized portion of the couplet was designated as Guale Island and incorporated into the island development model with the aforementioned scarps, absolute dates, results from local and regional studies and existing sea level information (fig. GEO B). 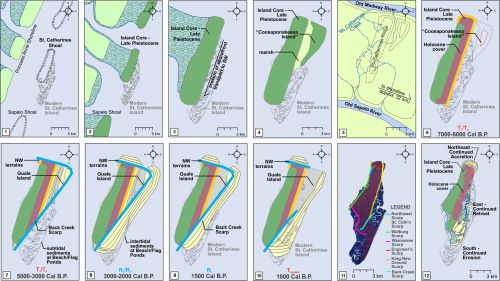 Additional vibracoring conducted along the eastern margin of the island in 2010-2012 has identified another island couplet that may have existed during the Late Pleistocene. This island has been designated Coosaponakeesa Island (Meyer, 2013).