The St. Catherines Island Lemur Program maintains several free-ranging troops of ring-tailed lemurs on the Island. The program supports conservation research into the behavior of these endangered lower Primates.

Ring-tailed lemurs are endemic to the southwestern region of the island of Madagascar off the southwest coast of Africa. The New York Zoological Society (now the Wildlife Conservation Society) introduced the species on St. Catherines Island in 1984 to study breeding and troop behavior.The population on St. Catherines Island exists as the only free-ranging population outside of Madagascar.

The species can live up to 27 years in captivity—or 16 to 19 years in the wild. On St. Catherines Island, the oldest lemur is around 20 years old.

The International Union for Conservation of Nature Red List identifies ring-tailed lemurs as “Near Threatened” based on the assumption that the species depleted by 20–25 percent over the last 24 years due to destruction of habitat and exploitation. 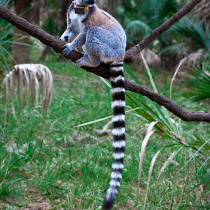 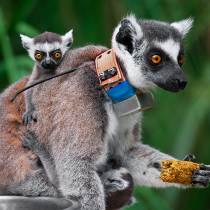 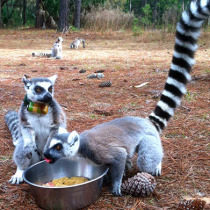